Coronavirus, Courage,
and Your Money 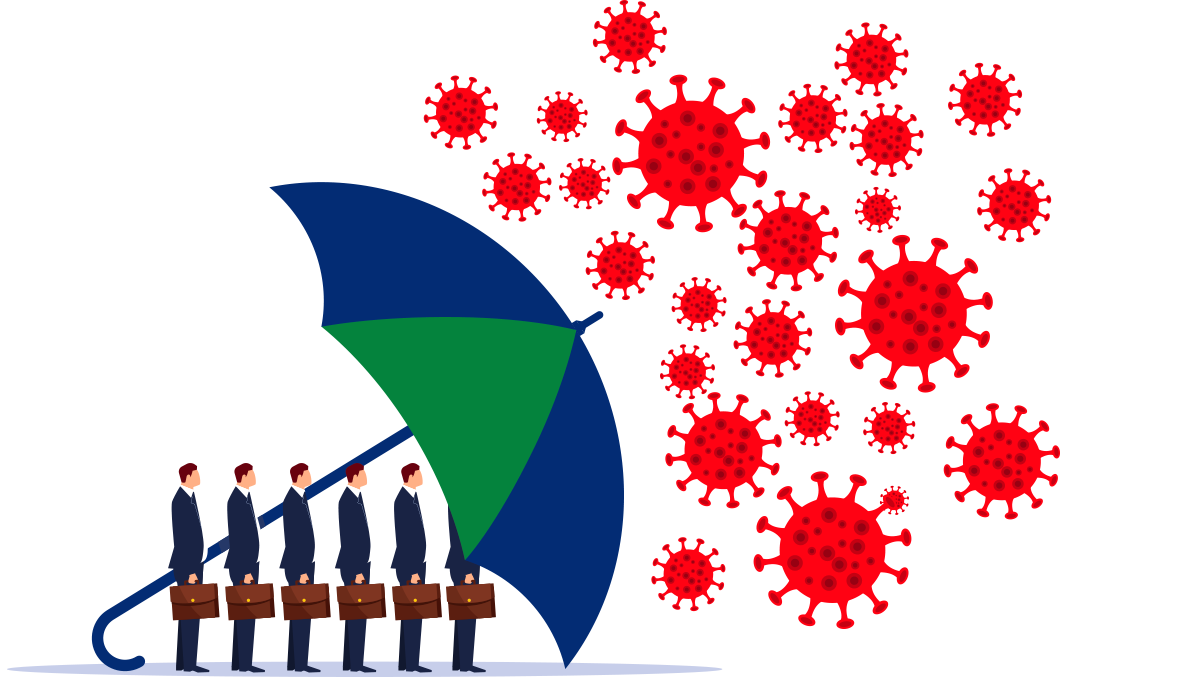 The Worst Of Times Can Bring Out The Best Of Us

These are the worst of times, yet the worst of times can bring out the best of us. My team and I have been pouring over what’s happening in the markets, the new law, and talking with some of the best and brightest people in the country. This is where our size can be beneficial. It’s one thing to hear something on CNBC, quite another when I can ask “Okay, tell me what you really think, and what you are doing about it”. My goal is to keep a promise made to every client. A promise to provide “Wealth Management with Wisdom and Care”. This is just one of the ways we can do that. Thank you for reading these letters and emails, and for the feedback you’ve given to me and our team. Honestly, hearing from you is what gives us joy. Please let us know if you find this information helpful.

So, let’s get to it! Chances are you are hearing about the twin bazookas fired off by the Federal Reserve and The Federal Government. I am going to continue bringing this up because it is such a big deal; and assuming we get out of this, we will all look back and understand it was because of the response of our leaders. This is not a political statement, simply an observation. Now we will see how well they can execute. The Fed has it a little easier: They injected about 3 Trillion dollars into the markets, and Jerome Powell has basically said “We will do whatever it takes, whenever it is needed, for as long as it is needed. And he can! He also has the benefit of Ben Bernanke’s yet untested moves during the Financial Crisis, which probably saved the worldwide economy back then. Powell was able to take these initiatives right off the shelf, with little concern of unintended runaway inflation. In fact, I think he would welcome a little bit of inflation this year.

President Trump signed the CARES Act into law last week, injecting a much needed $2.2 Trillion dollars into the economy. If you are a client, please be on alert: You will be receiving a separate letter outlining ten proactive moves to consider right now. Frankly, only one of them has to do with your portfolio, and as I have mentioned in previous communications, we’ve already done two rounds on each client’s portfolio. The key here is to make sure your portfolio remains congruent with your personal situation, and the plan we’ve laid out for you – long before any of this happened. We stressed tested the plan, understood if and where a client may be vulnerable and are acting accordingly. We are also working on many of the remaining nine items, and I want to keep you in the loop. These are the times to keep a level head and think strategically, and I am excited about some of the opportunities the new law is presenting to most of our clients.

I make no prediction about the markets except to say I believe they will continue to be volatile until we get more data, and with it – more clarity. You can’t manage what you can’t measure, and the United States was behind other nations in terms of testing. The market has been in panic mode, plunging one day on a piece of news, then skyrocketing the next on something else. Fear cuts both ways – fear of loss and fear of missing out. Our kids call that FOMO, and while most people don’t associate that with the stock market, it is very real. Just look at any 1000 point UP day in the Dow- occurring several times in the last 3 weeks. We are now seeing the reverse of that. The last two days have been comforting – at least for now. These swings are not normal, and I understand how uncomfortable it can be. There will be a time when the fog clears, and we have a much clearer understanding of how many people are afflicted, and who is not. Eventually, they will get the all clear to return to work, and our lives will begin to return to normal. Or as normal as they are going to get.

Things are going to be different, but different isn’t bad, it’s just different! I am finding that out in my own small business, where I’ve had 25 employees all working from home. We are finding ways to keep communication flowing, and most of us are finding this time an opportunity to be even more effective. Phone calls are going to one person and being delegated to the appropriate team member. While that’s not very different, their ability to hyper focus on just one person without interruption is. That’s another thing that’s different- I have the time to send you letters outlining what we are learning and what we are thinking! Again, different isn’t bad, except that my letters might, from time to time, put you to sleep.

If you saw Neil Kashkari’s (Head of Federal Reserve in Minneapolis) interview on 60 Minutes, you learned that there is no end to their ability to shower our economy with cash. It has been a firehose aimed directly at the areas on fire. It has worked, and the building is still standing. Market failures have reversed themselves and the Fed has averted what happened in the financial crisis. It also has bullets left.

And what he said next, is what intrigued me the most. Kashkari also said that as they looked back to the financial crisis, they learned that our leaders in the Fed and Government made TWO big mistakes- they were too slow and too timid. First, they lowered rates, then they did QE1. Months later they did QE2 and even QE3. This time, Jerome Powell had the benefit of the financial crisis, and was able to take these programs (which had never been done and tested before the financial crisis) right off the shelf, and he was able to do it faster and with few misgivings. Research done by Mark Zandi and Alan Blinder found that the QE programs did not trigger inflation as was feared, and without them – even as delayed as they were – things would have been much worse.

A Central Bank’s (Federal Reserve in the US and ECB in Europe) role in any economy is to contain the damage. They cannot restart an economy. Going back to the financial crisis, on the fiscal side, the Treasury was slow and timid as well. It takes time to work through the system to get where it needs to go. First, they lowered taxes, then there was a temporary payroll tax cut. There was cash for clunkers and TARP and a bunch of other initiatives to stop the bleeding and restore faith in the financial system. I really appreciated his honesty. Kashkari said, “We were too targeted in an attempt to only help the deserving. In hindsight we should have erred by over-reacting to help everyone- deserving and not deserving. Err on being generous. If we had done that, the crisis would have been less severe”. Today, small businesses need an incentive to keep employees because it takes too long to get them back to work – it took 10 years for unemployment rate to get back below 5%.

In a separate interview, former Chief Economic Advisor Gary Cohn commented, “You cannot overreact to this situation. It is best to be decisive and move quickly. If we make a mistake, fine. The government and federal reserve cannot make a mistake of under spending. When we are dealing with imperfect information, accept that we may make imperfect decisions”. Don’t let perfect be the enemy of good.

There are no bad actors here like there was in 2008. No one caused this. We also must be careful; the false assumption of retrospect can creep in. When we heard about the Wuhan virus wreaking havoc in China, didn’t we know that the virus would eventually make its way across the ocean and have a similar impact in the US? Isn’t this mess we’re in obvious in retrospect?

The truth is we’ve experienced quite a few major flu epidemics which ultimately had very in little impact on our economy and our markets.

The point here is that there have been major flu outbreaks in the past which looked just as scary as a current Coronavirus and ultimately were not economic – or portfolio – altering events. There was no reason to imagine this current flu outbreak could lead us to the current social distancing economic lockdown no matter how obvious it might seem in retrospect. I don’t think anyone could have predicted the Stay at Home orders, shutdowns of businesses or major runs on toilet paper.

Having said this, you don’t have to ask why Wall Street traders abandoned stocks in near panic mode. Our nation has never been confined to our homes before. Economies on a worldwide basis have been never been shut down. It’s an economic ice age. The coronavirus epidemic has raised so much uncertainty. The need for the $2.2 trillion dollar CARES bill makes sense when we consider that economists at the St. Louis District of the Federal Reserve Board are now predicting that the short-term unemployment rate will reach 32%, which is higher than the 24.9% rate at the worst point of the Great Depression of the 1930s. A record-shattering 10 million people have applied for unemployment benefits in just two weeks. I don’t want to scare you, and I do NOT believe we will end up in a Depression. This is temporary – hopefully, just a few months at most, as people who are unemployed will have juiced up cash flow that was not available in the Depression. In fact, there was no such thing as unemployment insurance. With so much of our economy shut down until further notice, it is clear to most of us that we are already in a recession. How long and how deep ultimately depends on getting people healthy, and back to work.

Those of you who are of a certain age may remember the Roseanne Roseanna Danna character from Saturday Night Live signature line: “It’s always something”. She might be right. And if you’ve remembered the character, then you’ve also witnessed several crises over 30 years. You have also survived and even thrived during these more than three decades, and we have no intention of letting this one be different. To be clear, yes – we are facing another “once in a lifetime”, statistically impossible, market decline – and it is scary! You might feel stressed, cooped up in your house, unable to go to the gym, and go out to dinner with friends. Know that stress intensifies any negative thoughts and impairs your ability to think flexibly. I am not sure watching CNC, CNN or Fox 24/7 is adding much to anyone’s peace of mind.

There are a lot of us with big shoulders at Key Financial and we’ve been through times like this – and worse – before. We are all working 24/7, but there IS one thing we cannot do: Protect you from the virus itself. Please let us worry about your financial affairs.

This way, you can focus on remaining safe and healthy.

Be the first to hear what Patti has to say next.

Key Financial has been providing Wealth Management advice for over 25 years.
Find out how we can help you today.